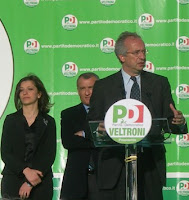 "Voce Repubblicana", 27th september 2008
by Lanfranco Palazzolo
Interview with Francesco Storace - preview
(on the left Marrazzo behind Veltroni)
At the time of the leadership of Region Lazio, my administration opened hospitals, not closing them, as Today the Marrazzo's regional council, which has produced a debt health more than mine. He told the "Voce Repubblicana" former Minister of Health and Governor of Region Lazio Francesco Storace (The Right party).
Senator Storace, what the financial failure of health Lazio caused by come?
"I want to clarify that the plan return that must implement the reached the regional Lazio on Health was caused by debts of his own administration. Who likes to read the numbers knows perfectly that the Lazio Region will close its management with a deficit two billion euros. This is an infinitely debt larger than that produced my administration. The current Lazio's regional council preaches well but scratching badly. If they were to increase the debt, should make an examination conscience. While producing a debt, my thought has come to open hospitals. I think at Sant'Andrea, the hospital Regina Elena, at Tor Vergata, the institute for paraplegics Ostia, the CTO. While this came with hospitals close. We must ask ourselves: Health is a cost or service?".
At the time of his council regionale there were many criticisms on Health ...
"I claim the choices made to give more services to citizens. I remember when I came imposition of a ticket euro for the more affluent families. Today, the ticket costs three times. Frankly this is a game where there is no more debate. There is a structural reality - and this is right Marrazzo -- causing a deficit. These hospitals and university religious. This is a specialty of Lazio. But the regional council have to stop to make propaganda".
Which hospital would close? Do you think the commissaryship has come too late?
"On commissaryship we must remember who was activated from Government of Romano Prodi. This was one of the last letters signed by the President of the Council. I do not close the hospital San Giacomo. I say this because we are talking about the Company Local health care less indebted Lazio. So the savings would be marginal".
What was the fundamental mistake of Marrazzo?
"There has watched the exits of Health. It's 'elementary. If the deficit grows every day would have been sensible to put the problem how to fall from that debt".
What kind of damage there will be a public health Lazio?
"Do not be quantified because there is no strategy. Let me know What did the regional plan of Health in Lazio. Today I see that my accusers are doing worse".
Pubblicato da Lanfranco Palazzolo a 17:02 Nessun commento: 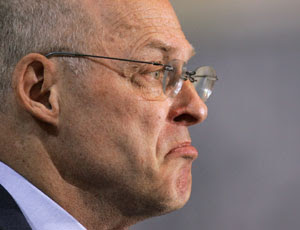 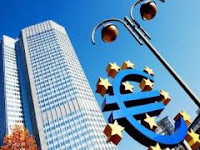 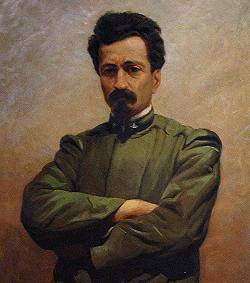