No dialogue with Hamas 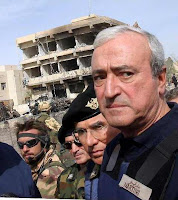 Propose a dialogue with Hamas is unrealistic. He told the "Voice" Mp Antonio Martino of the People of Freedom, former minster of defence and former minster of foreign.
Mp Martino, what can you say about Gaza's crisis?
"To fully understand the situation it is necessary framing it in the dramatic reality of our time: the attack on Islamist extremism in the West. This attack has as director Iran: a medieval theocracy, military arm of Hezbollah in Lebanon and Hamas in the Gaza Strip and of course there is the cooperation of Syria. Ask ourselves what Europe can do for all this. It seems that Europe is resigned to be able to propose dialogue and waste time as the solution to all ills. I think it is a noble aspiration. But not a credible policy".
What do you think of Italian position on MO?
"In 2006, Italy has sent 2,500 men in Lebanon in the UN mission. Many people wonder if the Italian soldiers have disarmed Hezbollah. Certainly not. It did not prevent the influx of weapons from Syria to Lebanon. For this reason we can not send a UN contingent watch the stars that while Hamas continues to arm. I think that Italy should abandon the path of disgrace and terzietà say which side we are. I think it is necessary to recognize that Iran and Hezbollah leaders want the destruction of Israel and the death of all Jews. And take note that this is terrorists. The alternative is between democracy and the Israeli anti-terrorism ".
Over the past two years Israel has changed its defense policy after this response in Gaza and the response in 2006 in Lebanon after the Hezbollah attack?
"I do not understand because it is considered proportionate use of terrorism against Israel and its disproportionate response to attacks. Israel has changed its positions very thanks to the policy of Sharon, who has abandoned settlements and moved thousands of Israeli settlers send away from their homes. The leader of Kadima was convinced that we could achieve peace by making territorial concessions. All this has not happened. In this way has strengthened the party of intransigent. The Palestinians of Hamas have made a bad use of concessions that have been made. Their concern was to control Gaza with a shot of hands. And they have launched their attacks against Israel".
Think you could avoid what happened knowing that Hamas would not confirm the truce with Israel?
"That does not say so because I do not have all the elements of knowledge to judge. It seems to me that the dialogue has its limits. At some point comes the moment of firmness. We can not tolerate this aggression against Israel".
Pubblicato da Lanfranco Palazzolo a 22:43 Nessun commento: