Catherine Ashton has no knowledge of European politics

Interview with Mario Mauro
Voce Repubblicana del 22 gennaio 2010
by Lanfranco Palazzolo
EU foreign minister Catherine Ashton knew nothing about the debate on EU seat at UN Security Council. He revealed the "voice" the MEP Mario Mauro, Head of Delegation of the PDL the European Parliament.
Mep Mauro, as he went the round of hearings of the new European commissioners. Are you satisfied or you feel that there have been cases of favoritism?
"In the EPP, we had this impression. We think that there have been cases of favoritism. I think for example what happened to the new head of security policy and foreign policy. Faced with an overt incompetence, in some circumstances widely acclaimed, has reached a final interim approval of the person. I think we should speak of incompetence in the case of a candidate who candidly admits he had never heard of the single EU seat on the UN Security Council".
What happened in the case of the portfolio for humanitarian aid that should have been managed by the Bulgarian Foreign Minister Rumina Jeleva?
"Against her, there was a barrage of questions focusing on tabloid content, which have melted away like snow in the sun after the intervention of the Legal Department of the European Parliament and the EU Commission. Against this, once compromised the stability of the candidate, the parliamentarians have asked with insistence to the Bulgarian government for his removal".
What role did the President to Members of Socialists and Democrats Martin Schultz?
"I think the attitude of liberals and socialists to be found in a lot greater. The European Commission was on the wave of popular success of the last European elections. Thirteen commissioners, plus the Executive Chairman of the instance, are an expression of the EPP. What you tried to do was to direct the modus vivendi of the European Commission for the coming years. We try to strike a commissioner popular as it had happened five years ago with Rocco Buttiglione, and try to prove that the Commission may be held hostage by the Socialists".
The Socialists will be the opposition in the European Parliament?
"The Eu Commission is a collegial body and should be something different from the European Parliament. Its purpose is to demonstrate the European spirit. I think that Barroso will succeed over time. Parliament moves in the logic of changing majorities. It 'hard to find a majority. I must record that the center-left in Europe has been defeated by a narrow majority of center when it was presented a motion on freedom of information in Italy".
Pubblicato da Lanfranco Palazzolo a 19:29 Nessun commento: 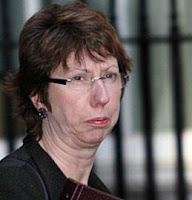